This book is a great reference guide on historic info on the great city of
Asbury Park, NJ.
~ Chris Marashlian, August 5, 2010, Amazon

Celebrating the Social Season's Early Advent. The House so Popular with Society People Signalizes Its Formal Opening with a Select Hop - Many Local People and Guests from Abroad Present - The Doctors Participate in the Dancing.

...attending the advent of a summer solstice is no longer something to be thought about as coming, like the conventionists...the main attraction of the inaugural day was the ball at the Brunswick. This event is the mile post for society, whose fiat in Asbury Park is...absolutely unalterable...The ladies came in theri light summer ball dresses and the gentlemen with the regulation clawhammer and immaculate white shirt fronts. The response to the last of the social bugle was quick, effective and flattteringly liberal. The cream and finish of Asbury Park was there.

Pasted into a matriarch's diary, the extracts from a May 19, 1894 newspaper column give us a peak at the Gilded Age in this fabled Jersey Shore resort. But who were these people? Where did they come from? Why were they here? And, who came here before them? 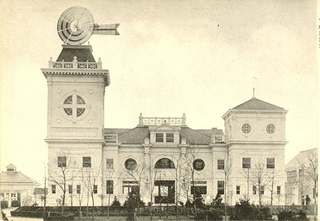 Designed by Edward Creiger, this building was the only structure to survive the fire that destroyed Shadow Lawn. Minus the windmill, it now houses the art department at Monmouth University.

Pike's 'peek' into storied past of West Long Branch

What do The Rolling Stones, the publisher of "Peyton Place" and President Woodrow Wilson have in common?

They're part of the rich history and storied past of West Long Branch, illustrated and narrated in Helen-Chantal Pike's new book, "West Long Branch Revisited."

"I didn't want to see any more history about the north Jersey Shore lost in this new century," said Pike, explaining why she wrote the book.

It is the second pictorial narrative by Pike on the topic and a sequel to a book she wrote 10 years ago. While the first volume focused on the town, the people and their Colonial descendants, the second focuses on the elaborate country estates, which were the summer residences of famous publishers, well-known entertainers and even a U.S. president.

So what was the allure of West Long Branch for all these high-society folks?

"Broadway theater was closed during the summer, so many came to the Long Branch area to ride horses, play golf and play polo," explained Pike, who has twice won the author's award from the New Jersey Studies Academic Alliance.

A member of the West Long Branch Historical Society, Pike researched the borough's history pouring through historical data discovered at the Monmouth County Historical Association and a local church. She bought historical artifacts on eBay and interviewed local townspeople, especially sanitation workers. ("It's amazing what some people will throw away.") The book also includes information gained through research from the first book.

"I held onto the research for 10 years until the opportunity presented itself to finish telling the story of West Long Branch," Pike said.

That research has paid off and found some unusual connections. Such as connections to one of the most famous rock 'n' roll bands of all time: The Rolling Stones. As it turns out, musical prodigy Julius Katchen, who lived in the area, performed with the Stones in 1968 and was part of the Stones' "Rock and Roll Circus" album.

An image from "West Long Branch Revisited" shows graduates of Highland Manor processing in the mid-1950s, prior to its sale to Monmouth Junior College.

Then there's the connection to the publisher of "Peyton Place," Kitty Messner, who owned a country estate in Long Branch. A controversial 1956 novel of infidelity in a small town, "Peyton Place" shocked America at a time when the hit TV series "Father Knows Best" was considered the norm for morals and values.

Kitty Messner's publishing company, Julian Messner Inc., made publishing history when it took a chance on then unknown author Grace Metalious. Dozens of other publishers had already turned down the book. It was a hit, remaining on The New York Times best-seller list for more than a year.

President Woodrow Wilson also adds to the allure of Long Branch's storied past. Wilson made a dramatic acceptance speech from an estate called Shadow Lawns after the Democratic Party nominated him to run for a second term in 1916.

But it wasn't only Wilson's presence that made this estate special. Pike dedicates a chapter to The Shadow Lawn, which, after a horrific fire in 1927, was reconstructed into a fireproof building resembling Versailles (the opulent 17th-century baroque palace designed for France's Louis XIV).

Pike, who has worked as a photographer and a travel writer for the Boston Herald, used some of her own pictures from a trip to Versailles to depict the similarities between structures at Versailles and The Shadow Lawns. The estate was turned into the Highland Manor All Girls School and is now part of Monmouth University, a transition that she terms "from cottages to classrooms."

Also in the book are tales of storied summer cottages, well-landscaped properties and the families that gave the town its distinctive country character.

"West Long Branch Revisited" marks the seventh book by the author, who also lectures at Rutgers University (media history and issues) and The College of New Jersey (writing).

Through writing these books, Pike has learned what it takes to get to the heart and history of a town. She offers this advice to aspiring historians:

West Long Branch Revisited. It was a SRO crowd at Borders in Eatontown, NJ, in February of 2007 for the debut of volume two.

West Long Branch Revisited
is the second volume of history that continues the town-and-country narrative started in 1996.

Visitors to these pages will discover such long-lost artifacts as:

* a Gilded Age connection between a set designer for Flo Ziegfeld, a mansion built with cereal money, mogul Donald Trump, and the Gingerbread Castle in Hamburg, NJ

* a portrait of the female publisher of "Peyton Place"

* the small-scale replica of Versailles, complete with decor, built with the nickels and dimes of a F.W. Woolworth executive's salary

* the parquet shared by Big Band leader Tommy Tucker and the first woman ambassador to Denmark.

Published in 1996, volume one follows the year-round community as it evolves from an economy based largely 19th century farming trends into its post-World War II conversion as a seashore suburb.

One of my stories about this book's cover is about a new homeowner who called the police after seeing me take pictures at a local park - even after I showed him the book that was in the seat under my camera bag and explained I was working on volume two. As a precautionary measure, I next drove to the police station where the chief said, "I knew it was you. Times are changing and new people moving into the area don't know their neighbors or the people who contribute to the community. We're getting more phone calls like that." His aunt, Clara Cotgreave, is the 8th grader sitting in the middle of the cover's graduation photo, and a substitute teacher throughout my entire elementary school career in Eatontown.

It's my sincere wish that people who make decisions about where to buy a house also make the choice to get to know their new hometowns.

Who are these celebrants?

Eatontown began as most towns do, with commerce.

In 1670 Englishman Thomas Eaton surveyed colonial Shrewsbury, lookign for falling water to build a mill in order to ply his trade. Nearly all the land around the Shrewsbury River was flat, and another colonist had already built a mill at Tintern Falls, naming it after his estate in Monmouthshire, England.

So Eaton traveled south on what might have been part of a Lenni Lenape Indian Trail. A few miles away from his Quaker village, Eaton found what he was looking for: swift-moving water tumbling over rocks. Eatontown dammed the brook at its narrows and built a grist mill on the south side of the resulting pond.

He wasn't the only miller looking for falling water in colonial Shrewsbury - a land grant that once extended as far south as Point Pleasant. On what was to become the road to Long Branch, another Quaker miller, John Williams, dammed Turle Creek and built his grist mill on the north side of the pond.

By 1796, a village had developed across from Eaton's mill with a tannery and general store on the east side of the Red Bank Turnpike. A tavern for the New York-Phladelphia stage coach trade was built on what would become the intersection of Main and Broad Streets. A second stage coach stop was established in Mechanicsville on the ocean-bound road. This village would later be called West Long Branch.

By 1850, Eaton's village had grown to include fur stores on Main Street and nearly 40 homes. The Eatontown Steamboat Company built docks on Oceanport Creek to ship milled flour and other farm produce up the South Shrewsbury River to markets in NewYork City. Entrepreneur James P. Allaire built a four-story stone warehouse at the docks, from which he shipped his bog iron forged at the Howell Works 15 miles away.

In return for all this commerce, New York sent back revenue as well as residents for long summer sojourns. Durig the next fifty years, Eatontown Township woudl get a train station that served regional transportation needs, trolley lines for local traffic, a racetrack for leisure enjoyment, and several fancy hotels. Horse and vegetable farms would dot the outskirts of all three of the township's original villages.

Just after the United States entered World War I, the War Department began buying briar-covered fields in Eatontown and Oceanport where Monmouth Park once stood in order to enlarge its Signal Corps Camp already established in Little Silver. It would first name the camp after the New Jersey inventor who helped develop the Morse telegraph. Later, it would be renamed after a pivotal battle in the American Revolution fought just outside Monmouth Courthouse.

This book, compiled and written during Eatontown's 325th founding year [1995], is an overview of its evolution from a small community with agricultural and equine roots to the modern-day industrial and suburban hub it is today.

Click here and enter Helen-Chantal Pike to order any of her 4 titles in this series.

For more than 10 years, Helen Pike has charted how resort land is used. In her new lecture,
Reside or Recreate:
How Decisions Are Made,
she explains how real estate developers and communities, alike, assess property.
Want details?
Call: 732-542-2068.