On Saturday, January 26, 2019 at 4:30 PM this email (slightly edited for privacy) came in through www.HelenPike.com:

I just read your father's book, Spiked Boots. I was wondering if you had or knew where I might get more information on a song from the book. It was called the Maggie Gray song. Your father sounded like he had heard it but it was too long to put in the book. My wife and I live in Charlestown and are very interested in the history here. Any info you have would be great. Thank you.

After a whirlwind weekend, I responded on Monday, January 28, 6:16 PM:

Thanks for reading "Spiked Boots" and your interest in discovering more about Charlestown lore. When Dad died in 1997 a lot of details like the kind you and your wife are seeking died with him, unfortunately.

That said, it wouldn't surprise me if there had been a folk tale of a woman who wandered lost only to find herself opposite the home she had left. Songs were a way of recounting those unusual happenings. Newspapers from way back in the day might also hint of such an occurrence.

But In a way, it's a kind of trope on "there's no place like home". I do remember my father "telling" that story, but never singing it.

The 2011 re-incarnation of the Yankee edition of Spiked Boots by the very talented Traci Evans. If you want her to do the same with a book whose pages are of similar weight, let me know.

Bob Pike, William Burroughs and Stephen Crane: Oh my! Or, oh why?
This is a little side project I started August 2, 2011, partly for an open-mic opportunity on August 6 at The Saint in Asbury Park where The BlackBox is hosting an afternoon tribute to the 1950s titled "The Great American Beat Off."
All I needed was a public reason to pursue an idea that popped up a while back when researching Crane at the same time The Countryman Press was readying the latest edition to Spiked Boots: Sketches of the North Country . The Naked Lunch is a deliciously unexpected coincidence.

Click the photo to go John's column on the NPT.

Salmon Press and Union Leader (Manchester, NH) columnist John Harrigan of Colebrook brought his well-thumbed copy of Robert E. Pike's "Spiked Boots" to the State House on Thursday (May 19, 2011) to support his vehement opposition to the Northern Pass Transmission line project which would slice through some of Coos County's back country.

If you are interested in what John has written about the NPT, and the link under his photo isn't working, please copy paste the following headline for your browser
John Harrigan: Taking land for private gain is simply just not right.

It should take you to through www.unionleader.com and to his weekly column of May 14, 2011.

So Bob Pike: Spiked Boots shares a shelf with a coffee mug that brands Francoise Sagan's famous coming-of-age novel, Bonjour Tristesse. It was required reading for my high school French class at Ranney School in Tinton Falls, NJ. Like the Connecticut River that divides the two sides of my father's personality, this image of a reader's bookshelf ~ and with unintentional irony ~ neatly captures the split between his intellect and his emotion. Thank you NizNoz for posting this on Flickr's "Bookshelf Project" !

It was a pleasure to met Paul at a Kingdom Books author event November 2011 in Lower Waterford, VT, before learning he had acknowledged the influence of Spiked Boots in his debut novel. Sure enough, as I read it, the language, cadences and even a few names knocked on memory's door. It's a great read.

Daughter-driver and father-author in Littleton, NH, on August 11, 1987 for what would turn out to be Bob Pike's last book tour. He died 10 years later on August 4, 1997.Photo courtesy of author and history enthusiast Floyd W. Ramsey. 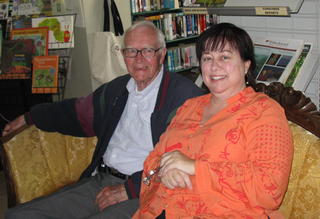 The general subject was logging in the Upper Connecticut River Valley. One topic that came up was a possible update of Bob Pike's book Drama on the Connecticut as well as Helen's memoir of her father that she started outlining in the summer of '07.

A specific topic of interest to both was creation of a regional museum on Pucker Street in the White Village.

At 82, David is still hard at work on the definitive history of Waterford Township.

If you have any ideas or recommendations regarding the museum and your preference for which Pike book project you'd like to read first,
please post them on the Talk page or send e-mail: helen@helenpike.com.

What others are saying about Bob Pike's books:
February 3, 2007
Dear Helen,
My name is Alison Bickford and I am a student at NHCTC in Berlin, N.H. I am taking a class called "North Country Literature and New England Tradition", and we have been reading your father's book, "Spiked Boots". He really does an excellent job at expressing the characters and the times. I am doing a small report on your father's life, splitting it up into four categories; His childhood, his college
and writting career, his middle years, and his retirement. I have been unable to find little of anything on him and I was hoping that you may
know where to look, or maybe even be willing to share some insight into the life of such a great New England author. I hope to hear from
you.
Sincerely,
Alison Bickford
********************
March 25, 2005
Ms. Pike:
I was researching information on the song 'Jordan Hill', as when I copied it long ago, I didn't get the last line. I was given the book "Spiked Boots", written by your father, as a birthday present, a few years back.
I remember my father telling us about the big fire while he worked at Charlie Roby's camp. He said that when it was all over and they were back at camp, they asked Johnny O'Hara to sing them a song. He said he would as long as no one got mad at anything he sang about.
A friend sent him a copy from the Colebrook Sentinel. My father knew the whole song by heart. Dad said their was at least 3 mistakes in the printed copy he received, including his name was Perley Nason instead of Mason. I know he treasured his copy of the song. He never had a chance to read "Spiked Boots", but I know he would have loved it as much as I did. I did not know that Robert Pike had a daughter that was an author, and look forward to reading some of your books.
Thanks for letting me ramble on.
Sincerely,
Arlene Freeman
******************
July 2, 2004
Dear Ms. Pike -
Just a line to let you know how much reading "Spiked Boots" and "Tall Trees" has meant to me. Although I'm a native New Jerseyan, I spent two wonderful summers as a hand on a Lancaster, N.H. farm. I was fifteen the first year, (1949) and we did everything with horsepower or by hand - no sissy tractor! I have kept a copy of your father's 8/11/1997 obituary, but never got around to buying his books until last week (thank goodness for Amazon!) Anyway, your postcard book on N.J. is next. Thank you for helping keep recognition of the wonderful North Country alive; I know many others have probably told you this already, but I just wanted to put in my two cents' worth.
John Crandall - Fort Lee, NJ
[Rutgers Class of 1956]