Long Drive on the Connecticut: click this link to read what fired up book publishers.
Post 1963 and pre 1967 is this brief draft written by R.E.P. to John Cameron, Knopf's editor: Thank you for your continued interest in a lumbering book. Three or four publishers, fired by that piece of mine in the At. Mon., approached me with the same proposition. I finally made a deal with Norton, with whose head man I have long been acquainted, and they are going to publish my effort this spring. I doubt that it will become famous but it was the best I could do.

Self-deprecating to a fault., but fortunately Dad lived long enough to see Tall Trees acquired "legs" ~ an apt and symbolic metaphor for a college cross-country runner.

In some parts of the United States the epic of history has been the filling up of vast spaces, but in New England it has been the long struggle with the wilderness. For generations the forest was the settler's friend and foe - it furnished him with his home and his fuel, but it was an obstacle to his plow and frequently the cause of his death, as it attested on numerous gravestones. I think of two in East Poultney, Vermont. One is for twelve-year-old Paul Marshel, who died in the woods when a sled loaded with wood ran over him. Two years later his father, Ichabod, died when a wagon "wheal" ran over him. There was another pioneer who went out to cut down trees, a logged rolled onto his leg, he saw he could not get loose, so he took his sheath-knife and sawed off his foot, bound his shirt around his leg, and hobbled home.

Yet, for all their hazards the forests were from the beginning a source of wealth - at first from furs, then from lumber, and in the last sixty yearsfrom pulpwood.

The gloom and mystery of the woods formerly caused them to be regarded as the abiding place of the powers of the unseen, and there is no doubt that the forest has exercised a subtle and profound influence on many generations of New Englanders. The constant danger and stillness made both red men and white men taciturn and helped to develop the fatalism that has often been remarked among Yankee yeomen and that is noticeable among woodsmen everywhere. Many of the distinctive qualities of the Yankee temperament can be accounted for only by the proximity of the forest - of a felling, unconscious but deep, of the presence of nature.

In short, the woods and the rivers played a large role in the lives of those people and in their contribution to an ever more complex and wealthy civilization. The woodsman was brought up as a child on a farm at the edge of the great forest areas. Almost as soon as he could walk he would get started on this future career by filling the kitchen woodbox and splitting kindling with which to light the morning fire. He learned to build brush and pole fences, he split fence rails, he split shakes with a froe and shave them with a draw-knife. He learned to make axe-handles, whiffletrees,
neck-yokes and crude sleds.

His first actual lumbering experience would be in logging from the family land whatever merchantable timber it contained, and in providing the immense amount of firewood that was required for cooking and for heating a house that was usually not wind-proof.

These activities and many others formed the basic training of the future woodsman. By the time he was sixteen years old he was already becoming a good axeman and was often quite capable of filling a man's place with a cant-dog. Ralph Gould asserts that when he was nine years old (he was born in 1870) he was given a man's axe and ordered to use it. Some people think that is an exaggeration. Nothing of the sort. My own father and grandfather did the same thing, and so did I. Abraham Lincoln in his autobiography states that he was born in 1809 and in 1816 was handed an axe and put to work.

Each year the boy's elder brothers and neighbors would return from the lumber camps, after five months' work, with as much as seventy-five or even a hundred dollars in their pockets, and of course the painted a romantic
picture of working and living in the camp, and the sixteen-year-olds would long for the coming fall, when they would join the reckless, generous, and social confrerie.

I think I have shown in these pages why a youth would choose to follow the woods and the river. But what is it that makes the difference between the men who are still cutting down trees today for two or three hundred dollars a week, and the old-time woodsman?

The answer is gasoline and the internal-combustion engine, chainsaws, bulldozers, log-hoists, and huge trucks. Woods work is merely incidental, to today's lumberjack. He could operate just as appropriately digging a canal, building a highway, or demolishing a slum. He's merely using a piece of machinery of which he really knows nothing and cares less. He acquired his
training and qualification by playing with a motorcycle and tinkering with a hot-rod.

So the old-fashioned, red-shirted, two-fisted, calked-booted woodsman of former eras has disappeared, and the tar-paper flaps forlornly on the roofs of the old log camps. Thus

The old order changeth, yielding place to the new,

And God fulfills himself in many ways,

Lest one good custom should corrupt the world.

I know that the present-day woods-laborer is economically far better off than the impoverished woodsmen who worked for Van Dyke sixty years ago, and I am glad of it, but as Ernest Martin Hopkins, the late president of Dartmouth College, wrote to me shortly before he died, "I know too that he is a damned sight less interesting!" 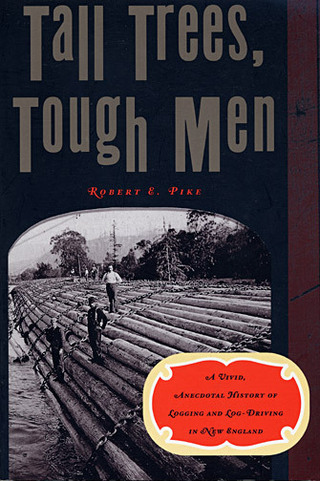 Amazon review October 22, 2011
by John Washington
I got this book because I'm a fan of the Ax Men show and wanted to read a bit more about the industry. This book covers the early industry and workers and is filled with a lot of great stories. It doesn't seem like it would be a fun topic or history, but Mr. Pike's writing style is lively and the characters that logged the New England woods are even livelier. I was pleasantly surprised and would definitely recommend the book.

When Dad was doing his research in the early '60s, I met the elfin Ruth Park. Recently, I came across her letters to Dad, including one from a Lumberton, NJ address. Look for this correspondence to be part of my new lecture series
Letters to Bob Pike.

This was the first book I bought in the early 1990s that clued me in to how seminal Tall Trees, Tough Men had become to subsequent New England authors. I'll be blogging about Mr. Mosher whom I met in 2010 at the Cobleigh Library in Lyndonville, VT when he was promoting Walking to Gatlinburg - a terrific and highly recommended read.

Tall Trees, Tough Men makes it onto the 'campus reads' list at Holyoke Community College in Massachusetts. Thanks Scott!

Maine guide Don Wilson does a great job explaining logging by using a wide variety of images, including a postcard view of a photo that also appears in Tall Trees. Don is also generous in his dedication that includes Dad and Sandy Ives. Why do I know the name Steve Rainsford? Found this 2001 book September 2011 at the Barnes & Noble in Holyoke, MA by simply browsing the regional section that features my publisher, as well, Arcadia.