Greetings From New Jersey: A Postcard Tour of the Garden State

On the 10th anniversary of my all-time, best-selling title, I received this e-mail on 9-9-11:
My wife and I grew up in Philadelphia listening to Springsteen and going to the Jersey Shore... we love your book! – Stephen Sharpe, Newport Beach, CA

Wish you were here: Introduction

Long before rock musician Bruce Springsteen picked up a glossy Tichnor Brothers postcard to decorate his first record cover in 1973, vacationers were sending the signature "Greetings From Asbury Park" card to family and friends. They were also sending greetings from Newark, Camden, Sea Isle City and Seaside Heights. In fact, sending postcards began as a fad in the final years of the nineteenth century as travel-happy Americans began scribbling their sentiments on thin, three-and-a-half by five-and-a-quarter-inch pieces of cardboard whose front sides were printed with a local view.

In the years following the end of the Civil War, middle class travel in America boomed. Union soldiers returning to visit battle scenes in Pennsylvania, Maryland and Virginia, paused with their families for a night, or two, in New Jersey. As America's Industrial Revolution picked up steam, health resorts along the seacoast and in the state's forested hideaways opened up, offering fresh air and salt water as cures for those working and living in the inner cities. At the same time, prosperous European travelers, their curiosity finally piqued by the stories of Washington Irving, Mark Twain and New Jersey's own James Fenimore Cooper, decided to come to America and see for themselves what brave new world had been tamed by the descendents of Puritans and fashioned by the continental émigrés.

Vacationers weren't the only travelers. By the last decade of the nineteenth century, railroad lines linked all the populated, and popular, areas of the country. Photographers loaded their bulky, and expensive, equipment onto baggage cars and traveled to the mountains, the lake, the cities, the seashore -- wherever there was opportunity. They set up shop, taking souvenir photographs that could be printed on the cheaper, smaller three-by-five inch postcard format. Vacationers bought them, scrawled a salutation, licked a stamp and sent them out.

"The time to take the picture is when you see it. The historic value of things, fixed in the form of a picture, is beyond price," Lake Hopatcong photographer and self-proclaimed postcard man William J. Harris wrote on his letterhead.

Everywhere the tourist went in New Jersey, postcards were sure to be there. A scenic vista. The town square. A Civil War or American Revolutionary monument. The hotel. A house of worship. Local humor. Trolleys. A covered bridge. The ferries. A railroad station. Those new-fangled automobiles. A restaurant. The amusement park. Main Street, New Jersey.

In 1893 when the first souvenir postcards were sent from the World's Columbian Exposition in Chicago, the telephone was not yet commonplace, let alone affordable. Postcards were an inexpensive way to let a relative know they would be arriving on the evening train; to order a load of coal for the winter; to inquire about the health of a friend. In 1896, you could buy and send a postcard for two copper coins -- a penny for the card and one for the postage. With twice-a-day mail delivery, you could invite friends to tea that morning and expect to see them that afternoon.

Arthur Livingston of New York began printing souvenir black-and-white postcards with the "Greetings From…" salutation in 1898. He started with New York views, the "greetings from" in separate script. Soon other metropolitan printers jumped on the bandwagon. Regional and local stationers issued their own cards, too. Businesses used postcards as direct-mail advertisements. Retail stores opened, selling nothing but postcard stock. Atlantic City and Asbury Park had boardwalk outlets. Photographers had studio props such as pickle barrels, a cut-out of a canoe on the high seas or bicycles set against a bird’s eye view backdrop creating the illusion that those being photographed for a souvenir card were riding over the resort. In the early years of the twentieth century, postcard sending, and collecting, reached such a fevered pitch that popular magazines deemed the postcard phenomenon a craze. In 1908, the United States Postal Service delivered a staggering six hundred sixty-seven million, seven hundred seventy-seven thousand, seven hundred, ninety-eight postcards.

The little cards solved a lot of communications problems, especially for those of few words or for those who didn't like writing letters. The post office helped the prose-shy by restricting the messages to the front of the cards in those early days. On the front of a card showing the life-saving crew at practice in the Holly Beach section of Wildwood, the writer scrawled on the side of the overturned boat "Alice can't be stopped." On the front of a Main Street view of Asbury Park showing Cook's Beehive Department Store, Bill wrote to his pals in the photo department at Prudential Life Insurance in Newark, "Come on in, the water is fine."

It wasn't until 1907 that postal patrons were allowed to pen their epistles on the backs, newly divided to allow for the separation of addressee from addresser. One writer filled the entire half of a card, detailing in tiny, perfectly legible penmanship, the ceremony dedicating the Billy Sunday Tabernacle on March 24th, 1915 in Paterson. Another used the back and front for a word game.

Writers informed their friends and acquaintances of news they didn't want to deliver in person. One couple had themselves photographed in a wicker rolling chair in Atlantic City by way of announcing that they had just gotten hitched. From health spas came reassuring words. Fans toured cemeteries and sent word of their pilgrimages to fellow enthusiasts.

Still others sent the news of horrific events they had witnessed such as the Atlantic City Flyer train wreck in Eatontown or the opera house block fire in Cranford. Disasters gave an added boost to tourism destinations as when the Morro Castle burned off the shore of Asbury Park in 1934. Its hulking remains just ten feet from Convention Hall provided a much-needed draw as the Depression years wore on. Even after the cruise ship was towed away, the photo card was still a popular seller, giving visitors bragging rights to having been in Asbury Park, site of the disaster.

In the explosion of domestic travel after World War II the relationship between tourism and postcards changed markedly. Chrome postcards, based on the latest in photographic and printing techniques, were churned out by the thousands by Curt Teich of Chicago, the Tichnors of Boston, Thomas Dexter of West Nyack, New York and George Scheller of Hackettstown. What defined these cards was Kodachrome, sixteen millimeter color movie film adapted to four-inch by five-inch sheet film by Eastman Kodak.

But then the Rochester, New York, film and photographic paper giant applied the smaller-cheaper-faster principle to its cameras, spawning an on-going interest in amateur photography that has changed why tourists buy postcards. But despite digital cameras that now give you pictures on demand, the desire to let everybody know, "Greetings From…" endures. 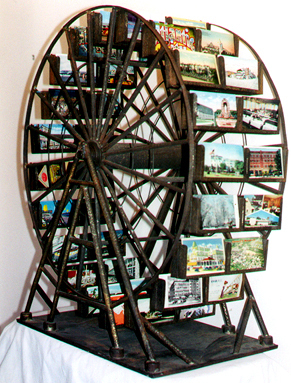 Available from the Pike Archives for museum exhibits and store-window displays.

Made by the North Western Can Co. of Chicago.

Same year as the Columbian Exposition in Chicago.

Same year travel postcards were first sent throughout the United States and abroad.

Want info on other postcard artifacts that are available for museum loans?

Table of Contents for "Greetings From New Jersey: A Postcard Tour of the Garden State"

Intro: Wish You Were Here

Chapter 3: Down the River, over Creeks, in the Pines
Delaware River Region

Chapter 7: The Delights of Deltiology
How to evaluate and organize a postcard collection. Includes a contact list of the state's postcard clubs. 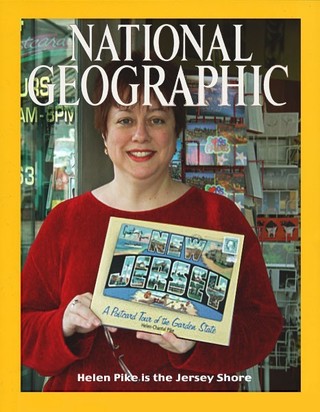 It was fun discovering my book for sale in Santa Monica, California. With me was my friend, fellow time-traveler, writer, and gifted graphics designer Peter Lucia.

Nearly everyone in Asbury Park has a six-degrees-of-separation story about Bruce. Often it's a tale of how someone's cousin-in-law's daughter went to school with Bruce's cousin-in-law's son's next-door neighbor once removed.
Helen-Chantal Pike tells the best story. "I know the owner of a bookstore," she said. "One day five scruffy guys came in and started digging in their pockets for enough change to buy a book." Bruce, it turned out, was one of them, and the book was a rhyming dictionary.
Asbury Park was also a rite of passage for newly minted teenage drivers who lived near the shore. "When you got your driver's license, you made the circuit," explained historian Helen Pike. "Guys drove around town, radio cranked up to full volumn, preening for each other. Girls flirted with the boys. Boys mooned the girls. And everyone gawked at the bikers hanging out in Mrs. Jay's Beer Garden." Absolutely fabulous graphic and historical tour de force, without peer!
Posted January 3, 2002, 3:45 PM EST on bn.com:
At first glace this seems to be a well-organized volume of very nice NJ postcards, from the local and State levels.

It is a ticket to a joyous and informative tour of all regions of the State, the glorious subterfuge being that you can discuss Garden State history like a pro...certainly one can realize this book is for anyone at any age with any connection to this great State.

You'll likely make a list of possible receipients to gift this volume to as you turn the pages. Better than outstanding, library people, postcard people, history buffs, booksellers, educators whom I've spoken with, agree; this is not an isolated rave review! 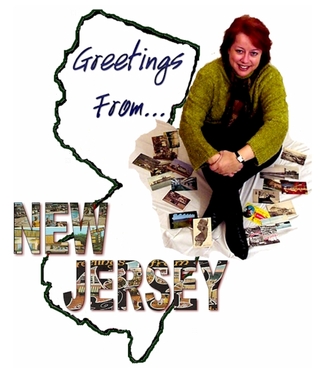 How Jersey Are You?My most requested presentation by libraries, social clubs, and elementary schools.

New York Times March 18, 2007
"Being from Jersey supersedes things like race, ethnicity, gender, sexuality, and age," said Kal Penn, actor, most recently seen in Mira Nair's The Namesake, but perhaps best known for his stoner road comedy Harold and Kumar. "No matter where you are on the planet, when you run into someone from New Jersey, there is an immediate bond."

My most frequently
requested programs:

*DIY Publishing
It's either personal
or business.

*Red Hot Words
writing about
the new you.

*Tree of Life
how to recount
family history.

*Memories to Memoirs
how to get started,
keep going,
get finished!

*The Persuasive Opinion
from ranting blog to
hard-copy respectability:
how to write op-ed
essays.

*Teen Writing
finding the guts
to be original
instead of cut-paste-
and-plagiarize from
the Internet. Currently out of print, the contents are under reconsidering for a mobile app!